HOW YOU CAN PREVENT BLEEDING GUMS WHEN BRUSHING TEETH

Healthy gums don’t bleed, so seeing blood in your spit when brushing or flossing is not normal. It could be an early sign of gum disease, so make sure you speak to your dental professional if you do experience bleeding gums when brushing teeth.

WHY DO MY GUMS BLEED WHEN I BRUSH MY TEETH?

Bleeding gums when brushing teeth can be a sign of gum disease, not that you are brushing too hard or using the wrong toothbrush. Bleeding gums can be caused by the build-up of plaque bacteria around, on and in between your teeth. Unless removed (usually by brushing), this bacteria can irritate your gums, which may cause the blood you see when brushing.

But here are five simple steps you can take to improve your daily oral care routine to reduce your risk of seeing blood when you brush your teeth:

1. Two minutes, twice per day Tooth brushing helps remove plaque bacteria and food particles that, if allowed to build up around, on and in between your teeth, can irritate your gums and lead to problems like gingivitis. Brush your teeth and gums for two minutes twice a day with a toothpaste. 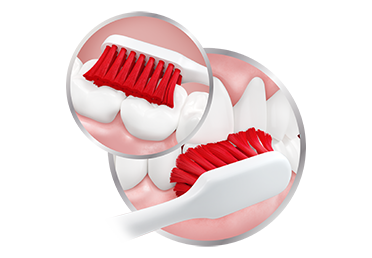 2. Be thorough Make sure you clean all the surfaces of your teeth whenever you brush, including hard to reach areas like in between your teeth. You can ask your dental professional about the best way to brush your teeth.

3. Be gentle When it comes to teeth cleaning, harder is not better. In fact, brushing too roughly or too much, can lead to teeth & gum problems, so brush carefully.

4. Don’t forget your gum line Your gum line can be susceptible to the build-up of plaque bacteria. Be especially careful to brush away plaque from this area as well as from the gaps in-between your teeth. Along with regular flossing or using interdental brushes, this can help you control plaque build-up. 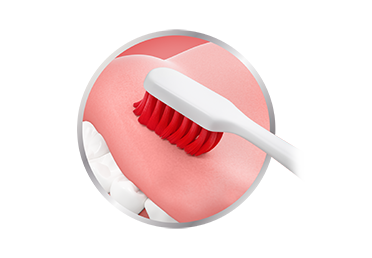 5. And don’t forget your tongue either Good oral hygiene isn’t just about your teeth and gums. Brushing your tongue gently can also help freshen your breath and clean your mouth by removing bacteria.

All you need to know about receding gums

Receding gums is when your gums draw back from your teeth, exposing the root beneath. It is a common condition but should not be ignored as it can be a sign of gum disease.

Caring For Your Gums